A major part of my gig at Yahoo! is to tell the story behind our stories, sharing our editorial successes and celebrating our content leadership. But I returned to my entertainment journalism roots as a contributing editor to Yahoo!’s record-breaking coverage of the Grammys and Oscars.

Moderating Yahoo!’s massive 2012 Grammys live blog, which attracted more than 130,000 visitors in six hours and peaked at over 10,000 active participants, was certainly a unique experience. In addition to writing about the awards show as it happened, I was pulling in select questions and comments from an endless stream of user generated content, as well as publishing relevant posts from the Yahoo! Music and official Grammy Twitter feeds. Here are a couple mashed-up examples of how we engaged our audience and added value for our users: 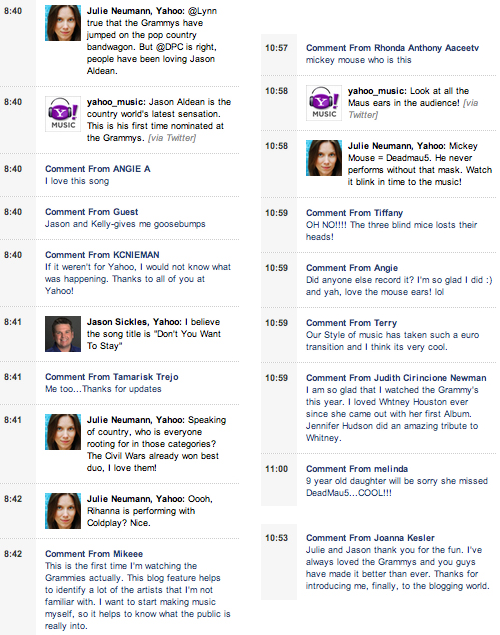 Things were a bit more relaxed for the Oscars. I contributed several articles on fashion to the Yahoo! Academy Awards blog, including an especially popular post on the Golden Girls of the Oscars that made it to the Yahoo! Homepage. Metallic sparklies have always had a special place in my heart.

So what records did our awards coverage break? Funny you should ask, because as soon as my editorial duties were done, I put my corporate storytelling hat back on and started digging through the data. The overarching bragging rights:

It was an honor to play on both the content and the comms side for these tentpole events.